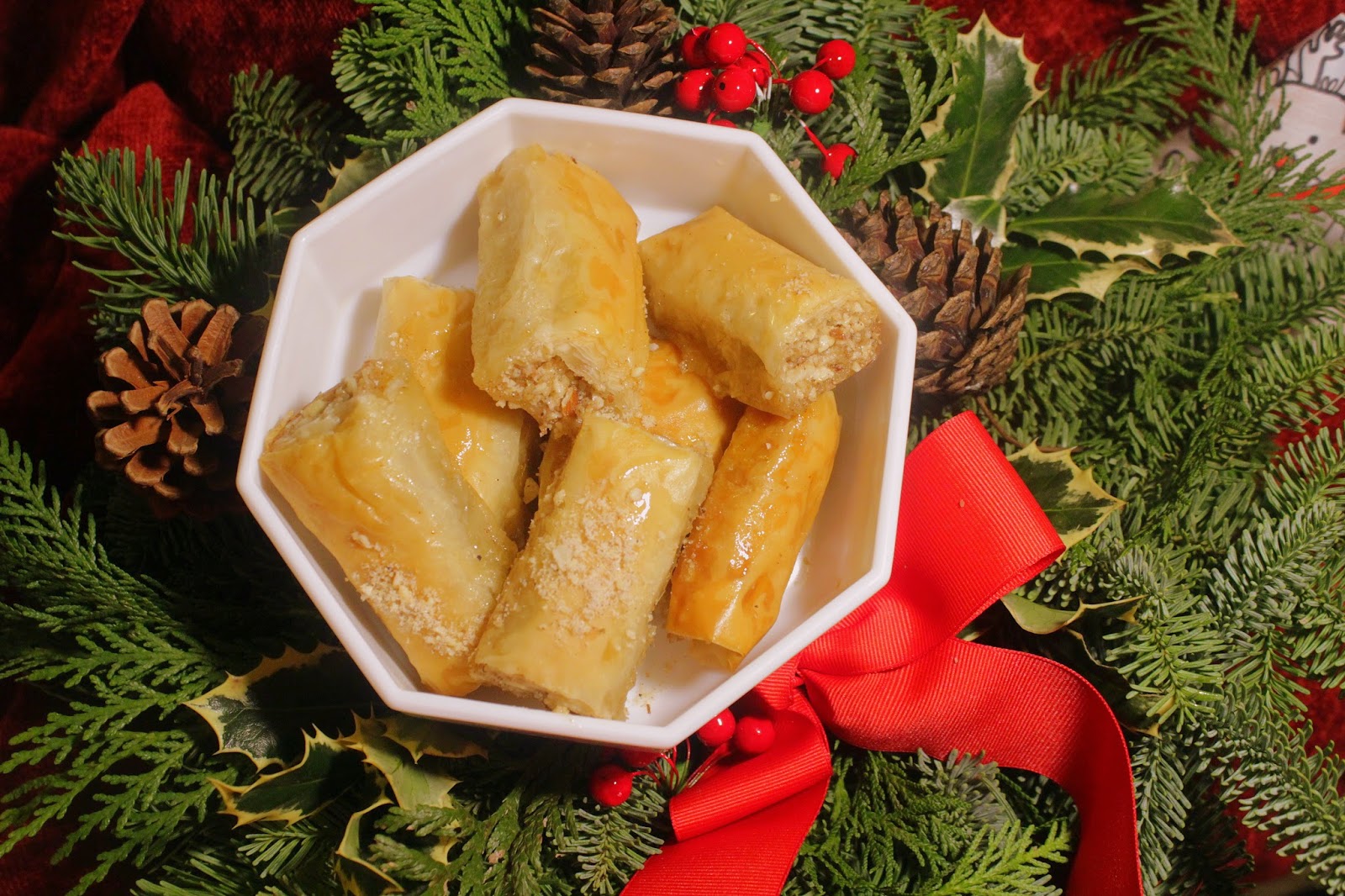 With Christmas around the corner and also to have a treat ready for the unexpected guests who stop by,  I made these delicious Baklavas. Instead of making them the traditional way I made them into rolls . I found this easier to serve and even little ones as old as 3 could eat it with out making a mess. So if you are planning a Christmas or New years party this would be a great make ahead ( I find Baklavas to taste better a day later)  dessert.
Happy Holidays!
Ingredients:
2 cups raw (and unsalted) nuts( I used a mix of almonds,walnuts,pecans & pistachios)
1/4 cup sugar
1/2 tsp ground cardamom
1/2 tsp ground cinnamon
1/2 tsp ground nutmeg
3 whole cloves ground
1 lb. phyllo dough, thawed
6 oz. unsalted butter, melted

Method:
Place 2 cups of the raw and unsalted shelled nuts in the bowl of a food processor with 1/4 cup of sugar, ground cinnamon, nutmeg, cardamom, and cloves. Pulse until the mixture looks like coarse sand. Unwrap the phyllo dough and unroll so the sheets lie flat. They should be 13×17 inches. Cover with a damp cloth. Butter a 9×13 baking dish. Preheat oven to 350°F.

Sprinkle 1/3 cup of nut filling along the long edge of the dough stack leaving a little margin at the ends. From the nut end, tightly roll the dough up like a carpet so the nut filling is in the center of the roll. Using a sharp knife, cut the roll into equal-sized pieces . Arrange the pieces in the baking dish. Repeat until the baking dish is full. Brush butter over the baklava rolls and bake for 30-35 minutes until golden brown.

Make the syrup: While the baklava is baking, combine the sugar, cinnamon stick, lemon peel, orange peel, and water in a small saucepan over high heat. Stir to dissolve the sugar and bring to a boil. Let boil for about 15 minutes. Stir the honey into the sugar syrup and cook for another minute or two. Remove from heat. Remove the peels and cinnamon stick.