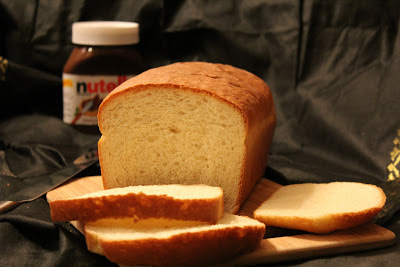 I had been using a bread-machine  for over an year now. Since that time we hardly ever buy the bread from the shops.
If you can whip up  hot, yummy bread without much effort, who would then go for the store bought ones?
This is a white bread recipe. I also make a wheat and white bread combo, which I shall be posting some time later.
Even though this  original recipe uses an electric mixer with the hook attachment, you can do the same in a bread machine too. Though I use the bread machine, I don't use it to bake the bread because I am not a big fan of  the shape of the bread that my bread machine makes. So  I use it only to make the dough.
Recipe source:Ina ( Barefoot Contessa)
Ingredients:
1/2 cup warm water (110 degrees)
2 packages dry yeast
1 teaspoon sugar
1 1/2 cups warm whole milk (110 degrees)
6 tablespoons (3/4 stick) unsalted butter, melted and cooled
1 1/2 tablespoons honey
2 extra-large egg yolks
5 to 6 cups all-purpose flour
1 tablespoon kosher salt
1 egg white, lightly beaten
Method:
Place the water in the bowl of an electric mixer fitted with a dough hook attachment. If the bowl is cold, be sure the water temperature doesn't drop below 110 degrees F. Add the yeast and sugar; stir and allow them to dissolve for 5 minutes.

Add the milk, butter, and honey. Mix on medium speed until blended. Add the egg yolks, 3 cups of the flour, and the salt. Mix on low speed for about 5 minutes. With the mixer still on low speed, add 2 more cups of flour. Raise the speed to medium and slowly add just enough of the remaining flour so the dough doesn't stick to the bowl. Add the flour slowly; you can always add more but you can't take it out. Knead on medium speed for about 8 minutes, adding flour as necessary.

Dump the dough out onto a floured surface and knead by hand for a minute, until the dough is smooth and elastic. Grease a bowl with butter, put the dough in the bowl, then turn it over so the top is lightly buttered. Cover the bowl with a damp towel and allow it to rise for one hour, until doubled in volume.

Grease two 9 x 5-inch loaf pans with butter. Divide the dough in half, roll each half into a loaf shape and place each in a prepared pan. Cover again with the damp towel, and allow to rise again for an hour, until doubled in volume.

Meanwhile, preheat the oven to 350 degrees F. When the dough is ready, brush the tops with the egg white and bake the breads for 40 to 45 minutes, until they sound hollow when tapped.Leave them in the pan for 5 minutes covered with a kitchen towel after applying a bit of butter to the crust.  Turn them out of the pans and cool completely on a wire rack by covering with a kitchen towel before slicing.
Posted by Vidhya at 10:27 PM