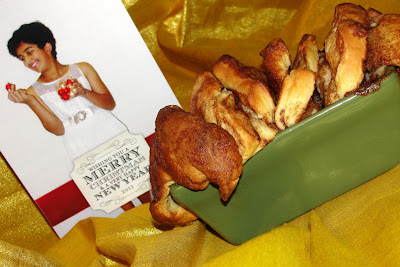 This would be my last post of this year. So I thought of putting something that would be good to make as a New Year breakfast, for a new beginning. I had made this for Christmas, though. As this re heats well, you may even make it ahead of time and have a relaxed beginning to your New Year, after the festivities of the new year's eve. I have combined the recipes from the Cinnamon Pull-Apart recipe from  Joy the Baker and the Cinnabons recipe from Across the range, as the original Cinnamon Pull-apart recipe doesn't re-heat well. But if you have enough time and you can go with the original recipe itself.
Pssst...my hubby was so generous with presents this Christmas (or was it Santa himself, I am not sure!..), I got an overload of presents - a bread machine,a digital food scale, a new camera and all the other stuff from my wish list. May be I was such a good girl throughout the year!! With all these new gadgets I hope to make my blog even better next year - of course, with all your encouragement and support.

Filling
1/2 Cup butter, softened
1 Cup brown sugar
2 tsp cinnamon
1/2 teaspoon fresh ground nutmeg
Method:
Dough can either be made in bread maker or the old fashioned way with hand. If using a breadmaker add the ingredients in the following order: boiling water, cold milk, melted butter, sugar, salt, egg, 1 cup of the flour, the pudding mix, 2 1/2 more cups of flour and dry yeast. Add another 1/2 cup of flour as the dough cycle runs, or as much flour as needed to make a soft, smooth dough . If  making the dough by hand in traditional manner take a large mixing bowl, combine the hot water with the cup of (cold) milk to make a luke warm milk-water mixture. Add dry yeast and when it starts to froth add the butter, sugar, salt, egg, flour and vanilla pudding mix. Then  make a sticky dough. Add more flour as needed (about a cup more, or as much as it takes to make a smooth dough). Let rise for an hour. Punch down. Roll dough to 17" x 10".
Combine filling ingredients and mix well. Heat in microwave 10 seconds to make it spreadable. Spread over rolled out dough getting as close to the edges as possible.  Slice the dough vertically, into six equal-sized strips.  Stack the strips on top of one another and slice the stack into six equal slices once again.  You’ll have six stacks of six squares.  Layer the dough squares in the loaf pan like a flip-book.  Place a kitchen towel over the loaf pan and allow in a warm place for 30 to 45 minutes or until almost doubled in size.
Preheat the oven to 350˚ F.  Transfer the loaf to the oven and bake 30-35 minutes, until the top is golden brown.  (If the top seems to be browning too quickly, cover loosely with foil at the end of baking.)  Remove from the oven and let rest in the pan 20-30 minutes.  Run a knife around the edges of the pan to loosen and carefully turn the loaf out, transferring to a serving plate.  Serve warm.
Sending this over to Radhika's Let's cook #10 Baked Goodies event

and Sangeetha's Bake fest # 2 an event started by Vardhini