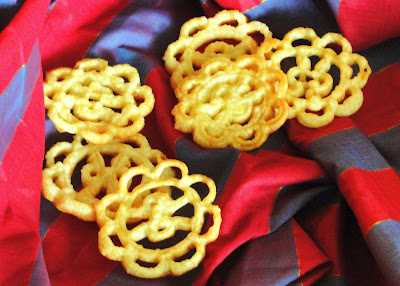 Achappams are one of the traditional Kerala snacks. But of late I came to realize that something similar to these exists in other cultures/countries, known by varying names such as Rosettes, Rose Cookies etc. I haven't had a chance to try any of these other delicacies yet, but I feel that an Achappam is an achappam whatever name you call it by! My theory is that these would have probably reached the other cultures through the European colonization of Kerala - or probably the other way round. Any way, in the traditional Kerala version, as with most of the Kerala cooking, you have to use the coconut milk also.
The unique, flower like shape of these cookies are the result of using the uniquely shaped molds - it is important that you get a mold made of the right metal, something that could retain heat. The one I use is made of brass.
Wishing all my beloved readers a Merry Christmas !

Method:
Beat the eggs in a deep vessel. Add sugar and coconut milk and mix it until the sugar dissolves. Mix in the rest of the ingredients to make a thick batter.

Heat the oil and dip the achappam/rose cookie mould in it. Immediately dip the mould in to the batter, making sure that only about 3/4th the thickness of the mould goes in the batter. Now put the mould with the batter coating into hot oil. (If the mould is not hot enough or too hot the batter will not hold on to the mould). Hold the mould in the hot oil for a few seconds and then gently shake the mould so that the batter shapped like achappams separates from the mould. (It would take some practice and geting used to doing to get the batter off the mould without breaking the Achappams or them losing thier shape)

Fry both sides on low-medium heat till slightly golden brown. Remove from oil and drain on a paper towel. Continue making more achappams until the batter is finished (make sure to dip the mould in the oil before dipping into the batter). Store in an airtight container to retain crispiness.