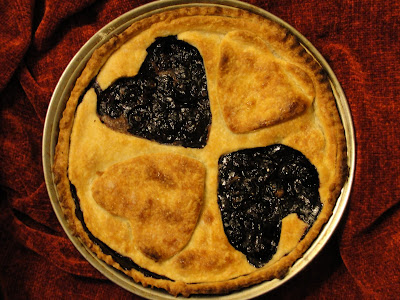 I love pies - for that matter, anything that is sweet. Blueberries were on sale at the Safeway supermarket that I frequent - two packs free when you buy one. An offer I couldn't resist. For all its nutritional benefits these where not a big hit at our household and I found them sitting uneaten in the refrigerator after a week. So I thought of putting good use of it (or should I say making them bad by adding sugar and fat:-) ) by making these pies so that these get consumed. But the final verdict - as the proof of the pudding is in eating - we three finished a 9" pie in a day. Not a bad achievement considering all the goodness of blueberries that went into our system!
Ingredients:
All purpose flour- 1 1/4 cup
Wheat flour - 3/4 cup
Vegetable shortening - 1 cup
Sugar - 1/2 cup
Salt - 1/4 tsp
Cold tap water - 1/4 cup
Method:
Put all the above ingredients except water in a food processor and pulse it till they are mixed well .Add water and mix it well to form a uniform dough .Cover with plastic wrap and refrigerate for at least 15 minutes.Roll out half the pie dough and drape it over a 9- or 10-inch pie pan to extend about 1/2-inch over the rim. Don't stretch the dough; if it's too small, just put it back on the board and re-roll it.Use flour while rolling out the dough so that it doesn't stick.
Ingredients for the filling:
Fresh blueberries, washed- 1 quart
Cornstarch -3 tablespoons
Sugar-3/4 cup
Ground cinnamon-1/8 tsp
Dash of freshly grated nutmeg
Lemon juice-1 teaspoon
Butter-4 teaspoons

Method:
Add to the washed berries corn starch, sugar, cinnamon, and freshly grated nutmeg. Stir gently.
Place the berry mixture in the prepared pie crust and sprinkle lemon juice over it. Spread1/2 teaspoons soft butter evenly over the top of the berry filling. Roll out the other half of the dough and place it over the filling. Crimp and flute the edges.Cut slits for the steam to escape. I like sprinkling some sugar over the pie crust before baking. Bake in a preheated oven(400 degree F ) for 30 mts and further 12mt at 450 degree F.

Sending this over A.W.E.D-British by DK hosted by Revathi