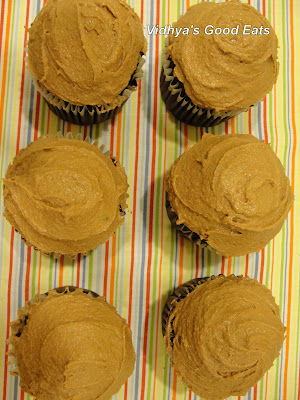 There is this bloggers group called "Sweet Punch", started by Ria, Divya and Maria, which conducts monthly baking challenges. I had joined this group as I love making and eating anything sweet. What more an excuse I need to try out new sweet dishes!
This is their second challenge. I somehow missed their first.
Our last month's challenge was to make Devil's Food Cupcakes with Vanilla Cream filling based on the recipe from  Baking Bites.


This recipe was quit simple, and I didn't have any difficulty following it. The problem, if I can say so, was the vanilla filling, which turned out a little lighter in consistency than expected - this was because I reduced the quantity of the all purpose flour mentioned in the recipe!. But when I kept the filling in the fridge for sometime, it thickened to the desired consistency somewhat.
Another thing that I goofed up was adding sugar the one that we get here in US to the Chocolate Buttercream instead of using confectioner's sugar which I think was called for in the recipe .Though the buttercream turned out a bit grainy we liked it that way.Lucky me.

As per my tasters, my daughter and my husband, this turned out to be one of my best cakes. The cupcakes were soft, moist and delicious and the vanilla filling was a sweet surprise which everyone liked. 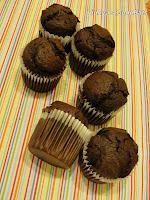 Here is the recipe:

1/2 cup butter, room temperature
2 cups sugar
3 large eggs
3/4 cup sour cream (low fat or full) -can be substituted with yogurt or cream mixed with a tsp of yogurt
1 tsp vanilla extract
2 cups all purpose flour
2 tsp baking soda
1/2 tsp salt
1/4 cup cocoa powder
2-oz dark chocolate
1 cup water, boiling
Method
Preheat the oven to 350F and lightly grease two 12-cup muffin tins.
In a large bowl, cream together butter and sugar until light.
Beat in eggs one at a time, followed by sour cream and vanilla extract.
In a small bowl, whisk together flour, baking soda and salt.
Add half of flour mixture to the butter mixture, followed by the sour cream and vanilla extract, followed by the addition of the rest of the flour mix.
Stir well between each addition and mix until no streaks of flour remain.
Stir the cocoa powder and the dark chocolate into the boiling water (easiest in a large measuring cup).
Pour chocolate water into the rest of the batter and stir until uniform.
Evenly distribute batter into prepared baking cups. Bake for 13-15 minutes, until a tester comes out clean and the cakes spring back when lightly pressed. (It’s fine if you can’t fit both trays into the oven at the same time, just wait until one batch finishes before putting in the second pan)
Turn cupcakes out onto a wire rack to cool completely before frosting and filling.


Vanilla Cream FillingChocolate Buttercream Frosting
1/2 cup butter, room temperature
1/2 cup unsweetened cocoa powder
2-3 cups powdered sugar
1/4 cup milk
1 tsp vanilla extract
Combine all ingredients in a large bowl and beat, with an electric mixer, until frosting is creamy, 3-5 minutes. Add additional powdered sugar as needed to achieve a thick, but not stiff, frosting that is easy to spread. Add additional milk, if necessary, to thin the frosting if it gets too thick.
Assembly
(A photo how-to of the assembly method can be found here.) Take a cooled cupcake and, using a small pairing knife, cut a cone of cake (1-inch across by 1-inch deep) out of the top. Trim off the pointy end of the cone, leaving a flat circle of cake. Set aside and repeat this process for all the cupcakes.
Take the cream filling and squeeze a tablespoon or so into each cupcake cavity, filling the hole up to the top with filling. Top off with a flat circle of cake to plug the hole and keep the filling in place. 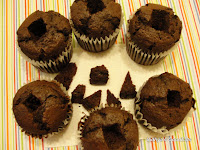 Using a butter knife or a small offset spatula, frost each cupcake with a layer of chocolate buttercream frosting. Place a dollop of icing in the center of the cupcake (on top of the cut out circle of cake) and spread from the center to the sides of the cupcake.
If you have leftover filling, transfer it to a fresh ziploc bag and cut a very small opening in one corner. Pipe a swirly line down the center of each cupcake.
Store in an airtight container until ready to serve. 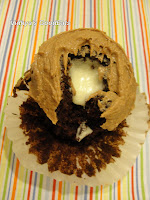 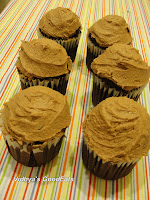